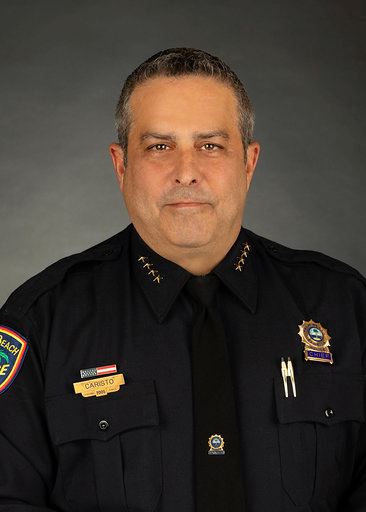 Chief Nicholas Caristo has over 37 years of law enforcement experience after serving 20 years with the New York City Police Department, where he specialized as an investigator in the Special Victims Unit before becoming a 9/11 First Responder.

Chief Caristo began his career with the Palm Beach Police Department in April 2005 serving in the Patrol Unit, Detective Bureau and Organized Crime Vice and Narcotics Unit. In October 2013, he was promoted to rank of Sergeant as Supervisor to Organized Crime Vice and Narcotics and Patrol. He was promoted to Lieutenant in January 2015. As Lieutenant, Chief Caristo was assigned to the Support Services Division supervising the Code Enforcement and Parking Unit, Business and Community Relations, Records Information Systems and the Communications Unit. He was appointed to the rank of Captain in October 2016, Major in October 2017 and Chief of Police in April 2019.

Throughout his career with the Palm Beach Police Department, Chief Caristo received 23 Department/Citizen commendations, was named Officer of the Month six times, was awarded Kiwanis Officer of the Quarter twice and is a recipient of the Sons of the American Revolution Law Enforcement Commendation Medal.

Chief Caristo holds a Bachelor of Science Degree in Criminal Justice from State University of New York Empire State College and a Master of Science in Organizational Leadership from Palm Beach Atlantic University. He is a graduate of the University of Louisville, Southern Police Institute, Command Officers Development Course.